How to Make 18th Century Stays
Part 3: Cutting and making up

Cut each pattern piece twice in the fold to get the two foundation layers in between which the boning is inserted. You only need seam allowance for the side seams - make it generous - and where the straps are attached in back. Do not cut the tab slits yet, except the one given in the pattern. If you cut them now, they'll frequently be in your way and start to fray. However, you should mark the slits at the same time as you mark the boning tunnels so that you don't accidentally place a bone across a slit.

If you want to lace it in back, leave the back parts folded, but unfold the front parts and place them wrong on wrong side. You'll now have three parts: One complete front and two half backs. For front-and-back lacing, leave all parts folded. You'll have four parts: two half fronts and two half backs. Each fold will become an edge with lacing holes.

Place the parts flat onto a surface and smooth them out so that they lie edge on edge. Pin the two layers together to keep them in place, once along each edge and here and there within. Take care not to lift up the fabric while doing so and stick the pins in as flatly as possible. The layers must not move against each other. When the layers are thus secured, you can lift them up carefully and roughly baste them together - again, not only along the edges, but also within the pattern piece.

Now mark all the lines for boning (as well as the tab slits) with pen and ruler. One bone must lie right next to the lacing edge, then a gap of about 1 cm for the lacing holes, and then another bone parallel to the edge. Next is the most slanted bone which ends at the previous one. Then you're free to place the other bones as has been described in the previous chapter. In case of back-only lacing, the centre front gets 2-4 vertical bones. 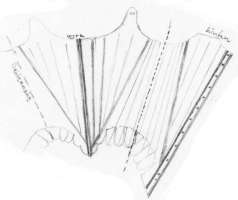 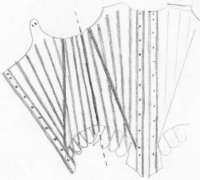 On the left, an illustration of the bone placement in case of back-only lacing (left) and front-and-back lacing (right). Both can be enlarged by clicking on them. Note how the two-lace variety has four edges with a bone-lacing-bone combination, while the other has only two edges and 2-4 parallel bones along the centre front. The dashed line represents the side seam.

The tunnels can be made in two ways:

Now insert the boning. Place the strip on top of the tunnel so that one end is about 10 mm away from one fabric edge and mark the other end, again 10 mm from the edge. Cut and blunt the edges as has been described earlier. Insert it into the tunnel, then cut the next one. In the area where the straps will be attached, keep the bones further away from the edge: In back, enough so that you can sew the straps on. In front, stop at the base of the stub as illustrated in the two sketches above. Wherever a bone meets the slanted diagonal bones, leave a gap of a few millimetres.

Now is the time for a fitting. If you have front lacing, baste the front edges onto tape so that they meet. Put the stays on and have a helper pull on the back edges. If they can be made to almost meet but for 3-5 cm from breast to waist level, the overall circumference is OK. Have a look at the bust part: The front strap stub should sit next to the armpit. Not so close as to chafe, but not so far away that the breast spills out at the side. If minor adjustments are necessary, take in or let out the side seams. However, if the stub is too close to the arm, and the stays are too wide, then taking in the side seam would move the stub even closer to the arm. In this case, you'll have to remove the surplus width from anywhere between the stub and the centre front, i.e. you'll have to cut the front again. Same if the stub is too far away from the arm and you need more circumference.

When the stays fit, the ends of the boning tunnels are closed off with either strong linen thread or multiple machine seams. This will prevent the bones from biting their way out of the tunnel.

If you're only making a mock-up for test-wearing, skip the following paragraphs and come back in for the lacing eyelets. In your case, they can be made willy-nilly because you'll have to undo them anyway if you add top fabric and lining later.

Cut top fabric and lining on the same pattern as the basis, but remember to apply any changes you've made to the basis. For back-only lacing, cut the front once in the fold and the back twice with about 2 cm allowance at the lacing edge. For front-and-back, cut each part twice with 2 cm allowance at the lacing edges. All other allowances as in the basis. Sew together, iron the allowances flat to one side (opposite to the direction in the basis) and place onto the basis, seam allowances facing towards the basis. Do the lining first: Sew it onto the basis exactly along the seam lines - this is best done by hand -, then smooth it out and treat it just as you did the two basis layers above, i.e. first pin, then baste, taking care that all layers lie smoothly. Flip the work piece and attach the top fabric the same way. It may happen that the lining and/or top fabric don't lie smoothly on the basis, i.e. one of the layers warps because it's wider than the others. This means that you haven't followed the seam lines exactly enough. Redo them. 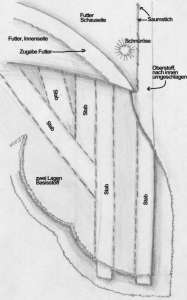 The picture to the left (click to enlarge) shows the stages of making up the various layers, viewed from the inside, combined into one as if they happened all at once. Or rather, as they would appear if you partially took finished stays apart.

What you see is the lower edge of a front lacing. In the bottom part of the picture is a double layer of base with the boning tunnels and two bones sticking out. Between them is the gap for the lacing holes. Below is the top fabric which peeks out from under the basis. (This is just for illustration, and partly because many top fabrics fray more than the base fabric, so it's always a good idea to add fraying allowance.) In the top half of the picture, the top fabric has been folded around the edge. The lining has been folded under and seam-stitched on top of it, and a lacing hole made though all layers. To the left, the lining has been folded up and away to reveal the left side with the folded-under allowance.

The lacing eyelets must be placed in a certain way to allow the single-cord spiral lacing that was customary in the 18th century. The first and second hole on one side and the last and second-to-last one on the other side sit closer together than the others, so that the rest of the holes are offset. See the next chapter for more info.

Do not punch the holes: It cuts the fabric threads, thus weakening the holes. Bore them using an awl. It may require some effort, but the holes made that way last for years without any reinforcement but overcasting. Extant stays have such bored and overcast holes, and the stitches aren't even very densely or nicely done. Buttonhole stitches may be stronger, but I have yet to see documentation for any other but overcasting stitches. If the hole grows smaller while working on it, take the awl to it again. If your awl is too small to make a large enough hole (as is often the case with the ivory awls that were used for whitework), use a pen or similarly shaped object to widen the hole some more. 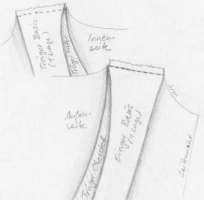 Now the straps. In the front pattern piece there is a small part that sticks up from the neckline, the aforementioned stub. The strap will be attached to this. Cut it back to a stump and round it off. The straps consist of the same layers as the body of the stays, i.e. one layer top fabric, two layers basis, one layer lining. Place top fabric layer onto the outside of the stays, right on right, wider end facing up and the curved side facing towards the centre back. Align the wider end with the slanted, straight line in the back part. See lower sketch in the left picture (which, incidentally, can be enlarged by clicking on it). That the layers don't lie exactly on top of each other in the picture is just for clarification. Place one layer of basis on top of it, then pin to the back part. The same on the inside of the stays: One layer of lining, one layer of basis on top, then baste to the back going through all layers. Now flip both parts of the strap up and iron the seam. If you did it right, all four layers should now lie exactly parallel while the basted seam lies flat. If that is not the case, you'll have to change the angle of the basted seam for one or more layers. But since we have to fit the straps anyway, leave it until later.

Put the stays on and pull the straps over your shoulders to meet the stumps in front. Arrange the straps so that they lie across the shoulders the way you want them to lie – close to the neck or far out on the shoulders, whatever you need. Remember that the closer you get to the neck, the greater the risk of the straps peeking out from under the robe. On the other hand, straps sitting too far out often tend to slip from the shoulder. When you're satisfied with the placement, pin the strap to the stump. It's fine if they don't meet straight on, but with a slight angle. They're not going to connect, anyway: In fact, the strap should end 2-3 cm away from the stump. Mark the end. Now have someone check that the seam between straps and back lie flat. Depending on the shape of your shoulders and your placement choice, they may buckle a bit on one side. In this case, you have to shorten the side of the strap where it buckles, i.e. change the angle of the seam.

Cut the ends of the tabs and stap stub round, then bind the edges with tape or ribbon. Sew the tape on outside the seam that closes off the tunnel ends, otherwise the boning may eat its way through the seam that holds the tape and you'll end up re-attaching the tape frequently. Attaching the tape just once will probably make you curse anyway because it's a real pain to get it to go round the slit ends. Do the top edge last: The slight curves of the neckline and around the straps will seem a picknick after the hassle with the slits, and give you time to cool off. ;)