The most important female head covering of the 18th century was the cap. It was worn by women of all classes and stations almost all the time, except for formal evening occasions such as opera or balls. Unfortunately, sources on caps are relatively rare: Not many specimens extant, and on pictures you usually either see the person from the front or too small to make out details. One thing is for certain: It is not enough to cut a circle, gather it all around and maybe attach a ruffle. This kind of cap, known to reenactors as the dread mob cap, is most the most likely to be wrong.

Every now and then there are discussions about whether caps can be other colours than whiteand whether they may be embroidered. My reply is: Yes and no. White is safe. Other colours and embroidery have, so far, only cropped up in the context of rural and middle-class townswomen's in some regions of Europe, e.g. Southern Germany (see gold-ebroidered cap to the right). In the case of Liotard's Chocolate Girl, whose cap appears to be pink, theories run from a cap cover to an echo of the colourful regional caps.

Let's stick with the undisputed white, then. The best and most widespread material was fine, bleached linen, but cotton (i.e. batiste) is also mentioned as early as 1715 (Frauenzimmer-Lexicon). The ruffles along the edge were made of the dame fabric as the cap, of even finer fabric, or of lace. Sometimes even the whole cap would be made of lace, but that can of course not be duplicated today, unless you are a bobbin demon with access to hair-thin linen thread.

There are so many varieties that once could fill a book if only there was more reliable information for each of them. Unfortunately you often see each style on one picture only, on one porcelain figurine only, and that's it. However, three main styles can be made out: 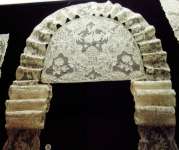 Type 1, 2 and 3 relate to each other a bit like a beach dress to a swimsuit to a bikini, and i'm not referring to the fabric consumption (although that is also there) but to the perceived decency. The smaller the cap, the more playful or frivolous it is. Since the upper class could afford to be frivolous while the lower ranks attached more imporance to decency or at least a façade thereof, the lower ranks tended towards the larger caps of type 1 (e.g. pic 3, a market seller) or type 2 (e.g. pic 5, a kitchen maid), as did women of "a certain age".

I cannot and will not offer an actual pattern but rather explain the principle. It is quite simple.

Caps that are meant to enclose the head must almost necessarily be of type 1. Type 2 tends to sit more on the top and back of the head; type 3 doesn't cover much at all.

The main part is a half circle or half oval in shape. It may become narrower towards the bottom, like an oval of which not quite half has been cut off. It is gathered a bit or finely pleated along the curved side. The band is cut twice as wide as needed, then folded in half lengthwise,l and the edges turned against each other. The gathered edge of the main part is then placed between those edges. The main part must therefore be at least large enough that it easily covers the back of the head - the band covers the rest. I would suggest a width of 25-30 cm and a height of 20-25 cm. The edge is long enough to go from ear to ear and anywhere from 4 to 15 cm wide (after folding), depending how much of the head it should cover. The band may be longer than that so that it hangs down or can be pinned up. I have seen examples of pinned-up bands that reached almost all the way to the opposite ear. In any case, it must be possible to gather the main part and still have its gathered edge reach from ear to ear, i.e. as long as the minimum length of the band. You may attach a ruffle to the front edge of the band. If you cut the band in two pieces rather than folding it, the ruffle can be gathered or pleated and placed between the two layers just like the main part.

In the case of type 2, the ruffle replaces the band. If the main part remains unchanged, this means that the cap is smaller than one of type 1 by the width of the band. If that isn't intended, the main part must be made larger. The main part is gathered again, while the ruffle is either gathered or pleated by a lot more than that. The ruffle may be folded in half so that the main part can be placed between the layers as in the case of type 1, but that would make gathering/pleating somewhat difficult. The ruffle is much longer than the edge of the main part, even after pleating, so that it hangs down on either side as barbes (French, from Italian barba=beard) as can be seen in pics 4 and 6 of type 2 above. In pics 2 and 3, they are pinned up. Pic 1 shows the shape of main part and ruffle quite nicely. I would suggest a ruffle of 50-70 cm in length, plus 30-50 cm for each barbe.

The straight edge of the main part is turned twice to form a tunnel. A narrow ribbon is attached to each end of the tunnel and threaded through it. So the tunnel must be wide enough to accomodate two ribbons. When the cap is put on, pull on the ribbons so that the straight edge becomes gathered (thus making the main part more rounded, moulding itself to the head) and around the head, tieing them in a bow atop the forehead. There are some caps where no such ribbon is visible, but rather a decorative ribbon - maybe the ribbons exit the tunnel halfway through and are tied there, I don't know.

Type 3, finally, is very hard to research since it is so small that it is hardly seen in portraits. In the few paintings that depict it from the side or back, one can only see a little heap of lace. The best and only useable source is a painting of a millinner visiting a customer attributed to Boucher and said to be in the Wallace Collection in London, although I don't remember seeing it there. If you ever get there and find the painting, please take a picture, buy a postcard and/or make a sketch if you can! I'd be very grateful if you shared it with me. Anyway, the small picture of type 3 above is the best detail of that painting I could find. What we see is a triangle with rounded corners, a bit rounded to follow the shape of the skull. So, obviously, it must be made of something stiff, maybe cardboard or buckram, and shaped. It was not placed on top of a chignon, because otherwise it would have to be more rounded. Lace peeks out at each edge. Probably the millinner simply arranged lace and maybe ribbons on top of a shaped piece of cardboard or buckram, which is all that type 3 consists of.

I know no contemporary quote on this subject, so I can only speculate. Large caps that enclose the head probably need no special method of attachment except in a high wind. Type 1 and some varieties of type 2 have the aforementioned ribbon to further secure them. If the cap is relatively small, as in pic 2 of type 2, these ribbons will not be enough to hold the cap in place. Only pins will help. This may mean poking holes through the fabric which will or will not vanish next time it's launered, depending on the size of the holes. To avoid this, you might consider attaching little loops along the edge, under the ruffle, to thread forked hairpins through.

Hats were also worn, but not as frequently as caps. In fact, hats were worn on top of a cap for most of the century (until the 1780s), and all the while there was only one type in evidence: the bergère. Other types of hat (e.g. that of Elisabeth Oberbüchler) were regional specialties.