As there never was much variation in the cut of kimono, colours, patterns and fabrics have always played an important role in Japanese clothing, conveying almost as much meaning as language and much more and subtler meaning than any European garment ever did. Variations were endless, rules of status, age and season complex, and critics merciless.

These rules were only valid among the top strata of society, of course - the imperial court, the shôgun and daimyô families -, and modern Japanese know only a tiny bit of these rules, but colours, patterns and fabrics still have to reflect the season, the age of the wearer, and the occasion. If you plan to wear Japanese garments in the presence of Japanese and be *serious* about it, it is recommended that you ask a Japanese confidant(e) for advice. The rules are much too complex to be listed.

Instead, let us look with a costumer's eye at the variations found in modern kimono.

There is an abundance of combinations of material and weave of which many are not known in the Western world. Traditional materials are linen made e.g. of hemp or abaca for work clothes and yukata, and silk for the upper class. The linen has been replaced by cotton from the 17th century on. Finer fabrics appear as twill, different kinds of satin and crępe, and linen weave.

Generally speaking, fabrics should have no more than a slight lustre. The most typical, found in 90% of kimono, is a kind of thick (compared to what you find in Western fabric shops) crępe made of overly twisted yarn that effects a non-too-bright lustre. Nowadays almost all kimono are made of synthetics with a lining of pongee or similar silk. Only the more expensive pieces of haregi (formal dress) are still entirely made of silk.

As a rule of thumb, colours get duller, and patterns smaller and more abstract, with the age of the wearer, and men's garments are generally dull-coloured to start with. Children wear bright colours such as red, garish pink, brilliant blue, spring green, violet. Teenage girls and young, unmarried women add cream and pastel colours. Patterns often display flowers, birds and other colourful phenomena of nature as well as traditional artifacts, e.g. hand-drums. The lining is off-white or cream, often merging with a colour complimenting that of the pattern towards the hem.

Female wedding kimono are typically but not necessarily red, white or black with an abundance of embroidery and silver/gold thread and foil. Red and white are lucky colours, black is ceremonial. The hem is padded with cotton wool and meant to open from below the obi to reveal a beautiful kosode and spread wide, dragging over the ground, to display the whole splendour of the decoration most effectively. 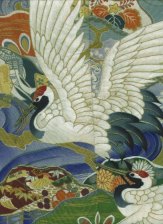 Married women turn to dark blue and green, brown and other muted colours with simple, abstract and geometric or repetitive (bamboo, wheels in water, tortoise shell etc.) patterns which get smaller and simpler as the wearer grows older. For festive occasions, from other people's weddings to funerals, a black kimono is called for. The decor covers only the lower part of the garment and sometimes the sleeves, being most splendid at the left (i.e. top) edge and usually "tapering" round the back towards the right edge. Gold and silver are modestly used, the lining white or red. Five family crests (closeup here) adorn the centre back and the middle of both sleeves in back and front. These festive kimono (tomesode) are IMHO even more beautiful than the overloaded bridal ones, and the epitome of Japanese elegance.

Male fashions of the upper class used to be quite colourful once, but like European male clothing, they have become duller during the 19th century, maybe under European influence. A grown-up man nowadays would choose dull colours such as dark blue, brown and grey, often in small geometric patterns, and black for formal occasions. The lining is typically blue.

Both men and women wear yukata for summer, bathing and dressing gowns. The fabric is plain cotton, the colours usually white and indigo, and the patterns simple - geometric or repetitive. It is not unusual that both sexes wear the same style (see picture).

There is a whole wealth of sophisticated techniques of fabric decoration which many Japanese can hardly afford anymore due to the high amount of manual work that goes into them. Patterns are achieved by weaving, printing, tie-dye, resist dye, stencilling, embroidery and painting or any combination thereof.

A relatively simple, but nonetheless expensive technique is tie-dyeing. In comparison to the Flower Power tie-dye, it is infinitely more refined, resulting in circles as small as 2mm in diameter that are arranged into complicated patterns, and other shapes. The techniques include binding, stitching, clamping, winding round poles and many more. Usually the creases are not smoothed out afterwards, but rather regarded as a vital part of the design.

Another popular technique is created by using yarn that is dyed before weaving, known as Ikat. As the start and end of the differently coloured portion isn't exactly the same for each shot, you get stripes that appear to fade in and out. The result may look simple, but dyeing the yarn involves a lot of manual labour with rules and brushes.

The most expensive, thus popular and prestigious technique is called yűzen, named after a 17th century fan painter. The technique is similar to your normal silk painting, i.e.

the pattern is outlined with a paste of rice starch to prevent the colour from flowing away, then hand coloured, completely covered with rice starch, and dipped into dye - or coloured with large brushes. The dye is often black or at least dark, but sometimes the dye is made to fade into the original or a different colour towards the top. The main differenence between yűzen and silk painting is that yűzen is infinitely more delicate, the outlines being only a millimetre or less wide. Real, hand-painted yűzen warrants kimono prices of millions of yen. For formal female kimono, it is now often imitated using printing techniques. The closer a kimono comes to imitating yűzen, the better it is.