Picture of the Month

Sorry I didn't deliver the picture in time for February. My excuse this time is that I had to get permission from the owner of the garment before I could start to write this rather complex article. 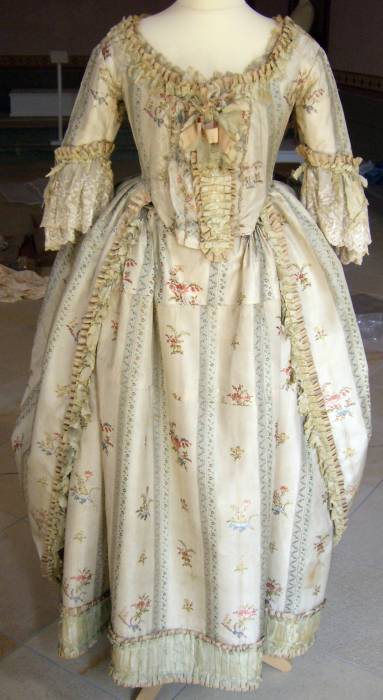 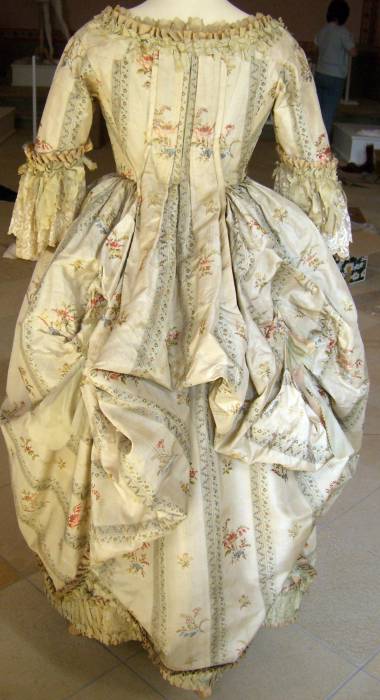 There's a rather friendly lady who collects period costume who let me help dismantle an exhibition, taking pictures while doing so. The only 18th century piece in the collection naturally caught my attention. It was presented as a Polonaise because the skirt was gathered up in back, but when I handled the dress, I became convinced that it was something completely different. The owner has kindly permitted me to use the pictures to present this rare puzzle to you.

At first glance, you'd probably classify the dress as a polonaise, just like I and its owner initially did. The dress fabric is a very late-18th-century-looking silk brocade, too. However, polonaises were usually made as anglaises with the skirt hitched up, whereas this dress has the back pleats that are typical of françaises. Françaises, however, were not worn hitched up, unless they were worn retroussé dans les poches, i.e. pulled through the pocket slits.

Upon close inspection, it turned out that this dress isn't a française at all: While a real française has a wide back panel pleated like this, this dress has a close-fitting back of the anglaise persuasion with separate pleats attached at the back neckline and tacked to the body at waist level. There's only one period kind of gown that fits this description: The robe à la piémontaise, which only existed for a few years during the 1780s and is, therefore, extremely rare.

However, I am convinced that the dress was heavily altered during the late 19th century. The first hint in that direction is the wide silk flounce round the skirt hem, down the front robe edges, around its hem and along the neckline and around the sleeves. It's pale green, light, linen-weave silk and set onto pale brown ribbed silk... and its shatters like hell. Pieces flake off it as soon as you look at it. 18th century silk, such as the one the bulk of the robe is made of, is usually much better preserved than that. It's late 19th century silks that tend to shatter due to chemical finishing which was all the rage at the time but, in the long run, damages the fibres. The ribbed foundation of those flounces is much better preserved, but also typical of late 19th century trimmings.

The next hint was the front edge of the bodice. In an 18th century garment you'd either expect an open front, framed by robings and filled with a stomacher (pre-1760s) , or a closed front, meeting edge to edge, closed with hooks and eyes. This garment, however, sports a roughly stomacher-shaped shattering-silk-cum-ribbed-silk thingy sewn onto one front edge which clearly isn't original. (So if this part isn't orignial, the rest of the shattering pale green and ribbed brown silk isn't either.) It hides a smooth edge which looks as if it may have been the original front edge, and panels with hooks and eyes on that look as if someone had scavenged pieces of top fabric, inexpertly adding them to the fronts to admit for a larger figure.

Why don't I think that the dress was created during the late 19th century? There's the fabric, which is clearly 18th century in style and much stronger than the shattering green stuff. And the make-up of the bodice, with the edges of top and lining turned to the inside and then sewn together very close to the edge. This is typical of the 18th century, but quite different from the typical mid-to-late 19th century technique.

My final verdict, therefore, is that we are looking at a robe à la piémontaise, changed during the late 19th century, probably for carnival, to fit the 18th century cliché better than the real thing. Despite the alterations, I envy the owner for having cheaply acquired one of the rarest 18th century garments known to exist.

Pictures of the month archive