What you need besides clothing

An under-petticoat that isn't very wide and a bit over knee-length, worn between shift and stays. It's supposed to preserve decency in case you fall or if the panier is lifted by a high wind – there were no drawers underneath. Cut as a rectangle and pleat it to the waist with a width of maybe 100-150 cm.

At least one should be worn over the panier or pocket hoops so that the hoops don't become visible through the skirt. I have spent some thought on what the patticoat should be made of in order to hide the hoops as well as possible, while not being too heavy. One possibility is to make it of lightweight silk, very wide, and gather it quite closely so as to achive lots of bulk while still being light. The other is to use wool padding, i.e. something like the quilted petticoats of which a few have been preserved. Wool is heavier, but padding may make up for if simply because you need much less fabric width to achieve the same effect. Cut and makeup are the same as for a jupe. In contrast to modern conceptions, fewer petticoats aren't necessarily better in hot weather.

Two bags made either of beautiful fabric or embroidered linen (sometimes even of patchwork), attached to a waistband and worn under the panier. See also here. Pocket hoops, as the name implies, serve as both pockets and hoops, i.e. you can forgo extra pockets. The size of the pockets (and the length of the slit in pockets, jupe and robe) is a matter of taste and depends on what you want to put inside: How long must the slit be to easily admit your hand holding your wallet, a cell phone, a camera? How big must the pocket be to hold all the things you want to have with you at all times? Unlike with modern garments, you don't have to be careful of the silhouette, so be generous, but don't make it too deep lest you have to bend in order to reach an item at the bottom.. Pockets were often beautifully embroidered even though they weren't visible. Since it was so easy to transport a lot of stuff without ruining the line of the garment, wrist bags were not used, no matter what flicks tell you. They appeared only when the slender Directoire line came into fashion, making pockets impossible.

usually had very long, straight handles and relatively small covers. It seems that green silk was especially popular. Lace, ruffles and fringes as known from the 19th century were not yet in fashion: Parasol covers tended to be plain. The spokes were made of whalebone. See also this page.
With parasols as with fans, very few people know what is authentic for the period, so even completely unsuitable ones are accepted in a pinch. However, please choose a 1900s parasol over a modern "replica" which usually is a) in the style of 1880-1900 and b) often uses plastic parts.

Like the cap, the fichu or kerchief that covers the neckline is regarded as guarding the woman's virtue. Middle-class women put a lot of stock by their virtue, especially if they didn't have much wealth to recommend them. Fashion required them to uncover their breasts, while decency and the priest required them to cover them. They compromised by wearing low-necked dresses and partlets; in the 18th century, partlets were replaced by kerchiefs. Kerchiefs/fichus could be triangular or squares folded into triangles, made of fine cotton, linen or wool, depending on the wealth of the wearer. Some fichus were even made of lace or embroidered all over.

If you want to be on the safe side, don't wear any jewellery. Outside court that is quite appropriate.


Finger rings are documented from the Renaissance on, but in the 18th century they were not overly popular except as wedding bands. Rich folk wore pearl necklaces and, from the mid-century on, chokers made of silk ribbons or lace. Earrings tended to be made in the shape of teardrops. Wrist bracelets made of pearls were also popular, often with a miniature of the loved one as a centre piece.
Commoners usually made do with a silk ribbon tied with a bow or closed with a silver filigree clasp, or a silver cross supspended form a silk ribbon. Apart from that, there are châtelaines suspended from the skirt waistband to which are attached e.g. the household keys and various sewing implements.

served to close the seams of breeches. They were often made as a set with the shoe buckles. Original knee buckles are even rarer on the market than shoe buckles, so you'll have to spend 100-600 Euros for them. Even repros are relatively rare.
Example: Pewter knee buckle (original) front, back. Size ca. 3x4 cm.

were used to close neck stocks at the back of the neck. See also here. Originals are extremely rare (I've only ever seen three on sale) and accordingly expensive. Only few suppliers offer replicas - Holger Rathsdorf and Townsend, for instance. See purveyors page.

For obvious reasons, I don't know much about swords and the like, and I don't want to: It's not ladylike. If you know anything on the subject, I'd be happy to publish a guest article on the subject.

A picture is worth more than a thousand words, so please regard the shoe page. Mark the flaps that were pulled through the buckles. What's also important is that shoes were made on one last, i.e. left and right shoe were the same. From time to time, left and right shoe were switched so that they were deformed evenly. The thing with the red heels (allegedly a mark of nobility), as well as hight heels for men, is IMHO overrated.
If you buy hobby shoes, choose black leather - rough side out for lower class, smooth side out for middle to upper. Really authentic shoes aren't cheap, so they should be versatile and comfy. No modern shoe can be remade to mimick a historical shoe, so don't try. Black leather is the best choice for both men and women, suitable for any class. Only wealthy women could afford silk-covered shoes; men just didn't.
If you've spent money on proper, authentic, hand-sewn shoes with leather soles, the seam that connects the upper to the sole will be protected by only a few mm of leather which are worn off astinishingly quickly. After that it's not long until the sole parts company with the upper. To stave off an expensive repair as long as possible, i recommend gluing on a thick leather sole before first wearing the shoe.

consisted of a decorative frame made of pewter, rhinestone set in pewter, brass, bronze or silver, and a mechanism made of iron. Buckles where the iron workings are not so rusted that they can't be moved are relatively rare and can cost 50-500 euros a pair. The mechanism consists of two iron wings attached to a central axis. One wing has two thorns (or spikes) that are stuck into one flap of the shoe from above. The other wing has longer spikes that go into the other flap. Women's shoe buckles didn't change much during the 18th century, whereas men's got bigger (up to 6x9 cm). Those who couldn't afford buckles made holes into the shoe flaps and threaded ribbons through them.
Pictures: Brass replica by Holger Rathsdorf, front and back. Below is an original silver women's buckle 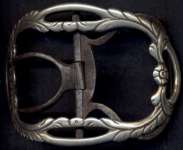 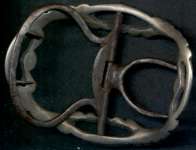 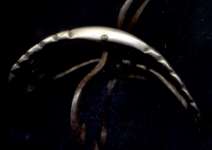 originally only served as a kind of sword substitute for men, but with the budding Polonaise fashion (c. 1770) women started to use them as well. Usually these were straight sticks with a more or less decorative knob (silver, porcelain, ivory, wood) on the end. They were longer and in most cases thinner than modern ones: Up to the lowest rib, later (esp. for ladies) even reaching almost to the shoulder.

were luxury items in the 18th century. Frames were made of steel or brass, very thin and light, and sometimes gilt- oder silver-plated. The side-pieces were straight, ended in small eyelets and had (not always) a joint in the middle so that the side-pieces didn't extend beyond the glasses when folded. The glasses were of course only available in glass, oval in shape and quite tiny in comparison to modern ones.
Even if you are fortunate enough to find a suitable frame at an antique dealer's, you can only wear authentic spectacles if your impediment is so slight that you can make do with normal, reflecting glass. However, even the most authenticity-aware people apparently don't know enough about spectacles to complain if your frame is OK while the glasses are not. Usually they'll even accept 19th century frames with side-pieces that curl around the ear. Therefore, you can have the worn-out, scratched plastic glasses of your modern, everyday spectacles put into the authentic frame and be accepted. Not logical, but there you are.